Works on Paper > Letters To Shakespeare 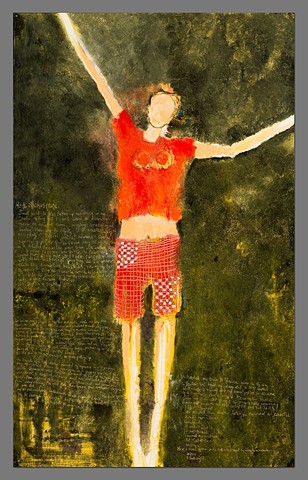 Hello Shakespeare. Small wildlife has taken up residence in my studio ceiling but I can’t seem to discourage them or…remove them - wiggling, scratching and barking their way to safety? is it health and prosperity? social justice? nirvana? Does a squirrel-y justice of the peace hang out with them - or a four footed forecaster alert them with weather reports? A sister raccoon who quiets the fears and wipes tears from the brother raccoon. What’s with their bickering? Can they see I’m (literally) underneath this disruptive behavior, trying my best to think? Diaper service would help - better yet, a wild animal’s Airbnb with bars, barbed wire and lots of carbs to halt the belly rumbles. That doesn’t sound right. What Is Nature’s Plan? We took our wedding money, bought a tent and backpacks, made our way from Paris on South in a rented car, and ventured towards Greece. Encountering us, a pair of foreigners sleeping on their Adriatic beach, a group of curious youngsters bellowed: “Good morning. Get up!” but our feigned sleep fooled nobody. Their commands got louder, repetitively begging us to acknowledge them and we fought it, in the insularity of our sleeping bags, protecting us from the torrent of a windy coastal beach. But, it was the pain in my gut preventing me from getting up. The French speaking doctors removed my Appendix in a Yugoslavia hospital where I became a passenger in a gripping hospital-of-the-sickly drama in which families screamed the news of the day from down below, to their sick and healing loved ones, who yelled back, if they could, from sectional mattresses, not so clean sheets and gangs of flies competing for what felt like the sparse but available oxygen. It was hot, and we patients were soothed with dense peasant bread, (the kind you pay for dearly in midtown Manhattan bakeries) hearty meat and potato stews, and steady fountains of chamomile tea. We boarded the train to France, where on the way to London we bought my skinny self a sexy leather skirt, readying myself for my dream job as co-director of a halfway house inside Kensington Palace, where we counseled groups of young adults recovering from battles with mental collapse and Bad Luck. We decided, four months later to relocate to coastal Israel, our Jewish Homeland. It was Israel. It wasn’t Illyria. I miss my brother. Not Sebastian. Mickey. Now I share space with raccoons and squirrels on a mountain top where It feels right.